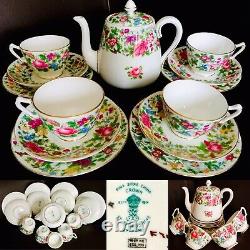 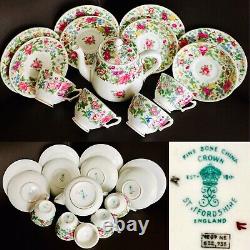 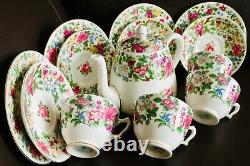 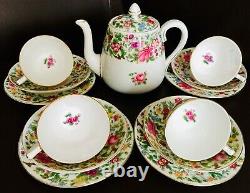 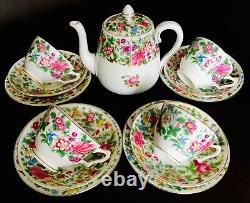 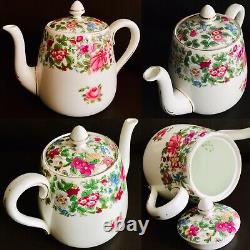 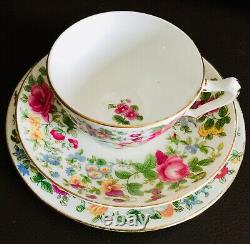 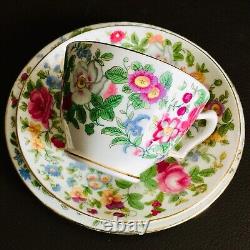 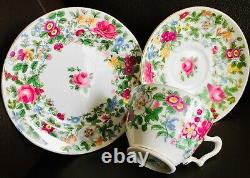 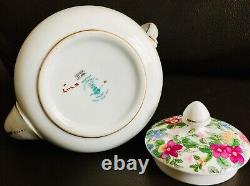 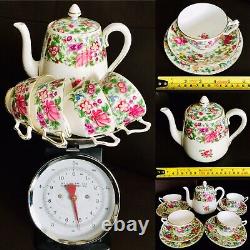 Superb Antique (1913) Registered Design E nglish Crown Staffordshire Bone China Tea Set. Well over 100 years old. One of the earlier pieces ever to have been made by Crown Staffordshire who commenced production under this name in 1897. The registered design 622733 on the back of thes e items dates them to exactly 1 913 during the reign of King George V when bone china was an expensive luxury for the wealthy and the aristocracy. Th is tea set would have been amongst the very best available in porcelain production of the day. All are beautifully 24ct gold gilded. I n near perfect condition. There are no chips or cracks whatsoever with only a few marks commensurate with age and v ery minor wear to the gold gilding. If you are looking for such set antique set , youd be very hard pressed to find many better quality and in better condition.

Crown Staffordshire Porcelain Company (1897 - 1948) were based in Minerva works, Park Street, Fenton, Stoke-on-Trent, England. The origins of the works date back to 1760. The works gets its name from "Minerva" who in the Roman religion, was the goddess of handicrafts, the professions and the arts.

Her shrine on the Aventine in Rome was a meeting place for guilds of craftsmen, including at one time dramatic poets and actors. Pottery works at Minerva Works was in existence in the early 1760's, owned by the Broade family and in the tenure of James Kent in 1764 and the tenure of the famous Mason family in 1806.

Thomas Green senior began the Green family connection with Minerva works, They were potters from around 1790 at Burslem. In 1833 Thomas junior who worked for Matthew Mayer (Shelton), Mintons, Copeland and Wedgwood rented the Minerva Works where with four of his sons, he commenced production of bone china. Two sons were travelling salesmen, one was an artist and one became production manager. The company remained on that site for the remainder of its history. After Thomas Green junior died in 1859 his widow, Margaret, ran the company with her four sons for the next 17 years M. Following Margaret Green's death in 1876, two of her sons, Thomas Allen and Spencer, bought out their brothers and the company became T A & S Green and established London showrooms, known as Green Bros. In 1897 the name Crown Staffordshire first appeared in the title of the firm and in 1903 it became a limited company under the name Crown Staffordshire Porcelain Co. By the turn of the century, the company were producing a wide range of very high quality bones china products. In the late 1920's Crown Staffordshire pioneered the large scale production of china floral ornaments and china costume jewellery for which they became very famous.

Both before and during World War II the company produced ware for the fighting services, including the British and Canadian navies. In 1948 the name of the company was changed to Crown Staffordshire China Co. In 1965 the Green family's connection the company ceased and the company became part of Coalport.

In July 1967 the Wedgwood Group took over the pottery company of Coalport. Wedgwood moved the Coalport brand to the Minerva Works in 1985 and the name Crown Staffordshire ceased to be used. In 2000 Coalport moved to a purpose built unit at the Wedgwood factory in Barlaston. The Minerva Works was demolished in late 2001. The item "Superb Antique (1913) Registered Design Crown Staffordshire Bone China Tea Set" is in sale since Wednesday, February 13, 2019.

This item is in the category "Pottery & Glass\Cookware, Dinnerware & Serveware\Cup & Saucers". The seller is "santoor-uk" and is located in Manchester . This item can be shipped worldwide.